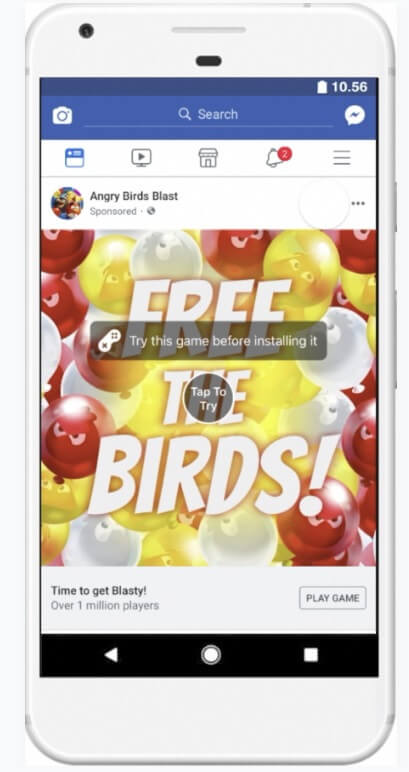 VentureBeat – Facebook has launched playable ads on the platform as a way to allow potential users to try a game before downloading. The hope is that gamers will be more enticed to download a game after trying it out via the interactive ads. The ad format is not an entirely new idea but is a new release for Facebook. In testing, the social network found that playable app-install ads are more effective and lead to users playing games more frequently once an app is downloaded since they know what to expect. (Full Story)

The Verge – Facebook is rolling out a minor redesign that personalizes the navigation bar for users. Facebook has tested numerous versions of the navigation bar, but typically showed everyone in a specific country the same options. Now, everyone will still see the News Feed, Notifications and Menu buttons, but the other slots will be replaced by whichever sections of the app a user accesses most. (Full Story)

Business Insider – Instagram (and Facebook) is officially rolling out a stat which will tell users how much time they spend on the social network’s mobile app. The company had previously announced these features would be coming, but now users should be able to see how much time they spend in the app, and also set limits after which they’ll receive a notification. Another part of this new addition will allow users to mute notifications from the app for a specific amount of time to make checking in less tempting. By adding these metrics, the social networks aim to make sure the time in these apps is “well spent.” (Full Story) 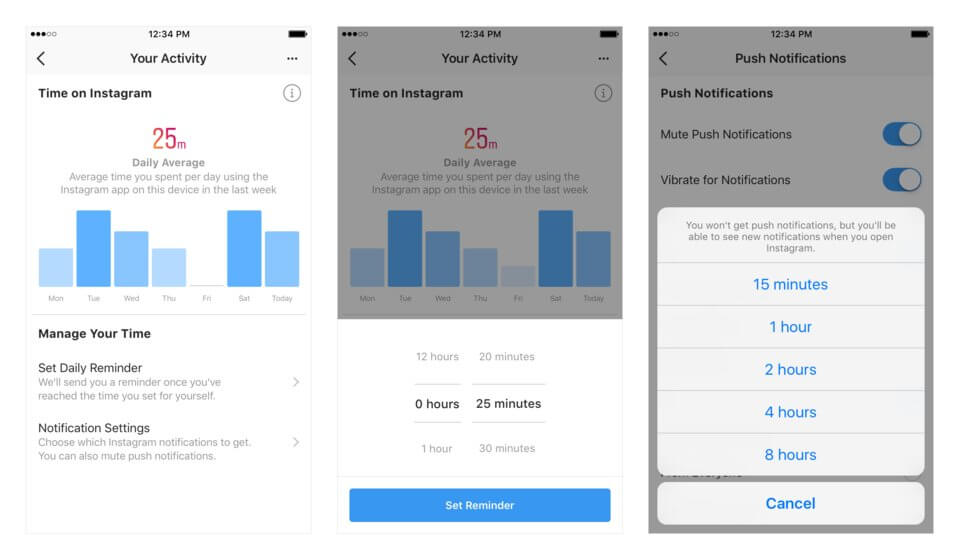 The Verge – Facebook is moving to seriously monetize WhatsApp by way of three new features to help consumers connect with businesses: a shortcut button that will allow consumers to immediately start a conversation, the ability to have businesses send customers information via WhatsApp (such as a boarding pass) and a real-time support offering. Facebook will also offer an ad unit that takes customers to an already-loaded WhatsApp chat where they can begin a conversation. (Full Story)

The Verge – Snapchat has launched new lenses that respond to users’ voices. Whereas other lenses require users to perform a motion (tap the screen) or gesture (move your hand over the frame), the latest addition will ask users to speak a simple word (such as “hi” or “okay”) and then animate the lens. The Verge points out that Snapchat did not easily pick up voice in its limited test, but this still shows a new way that Snap is adding to its lens offerings. (Full Story)

Time – Doctors have recently raised concern over something called “Snapchat dysmorphia,” which is a consequence of how social media may alter someone’s self-esteem. In essence, there are increasing numbers of patients who are seeking cosmetic surgery to look more like the filtered versions of themselves that are found on apps like Snapchat and Facetune. The concern is further heightened by the fact that many face filters yield unattainable looks. Filters aside, social media as a whole is shifting the plastic surgery inspiration of many. Around 55 percent of facial plastic surgeons report seeing patients who are seeking operations to look better in selfies. (Full Story)