AdWeek – California Gov. Gavin Newsom is working on a proposal that would require tech companies to pay Californians for their data. Newsom believes that residents should be able to “share in the wealth that is created from their data” and envisions this occurring by way of what he’s calling a “data dividend.” This proposal is still in very early stages and details like how much companies could be required to pay, or how much Californians could benefit, are yet to be decided. Marketers worry that a tax like this could hurt their bottom line, as even if the charge is initially aimed at Facebook and Google, increased costs will trickle down to advertisers. (Full Story)

CNBC – It’s been reported that Facebook tracks users the company thinks could be a threat to the its offices and employees. If Facebook identifies a user who has made what they consider to be serious threats toward the company, they will inform their security to be on the lookout for those individuals, and in some cases will inform the proper authorities. While this tactic is “very big brother-esque,” it does aid in keeping Facebook’s employees safe. (Full Story)

Digiday – Facebook has created a new funding program that will allow it to work with publishers and influencers on new shows for Facebook Watch. Facebook has explored different ways to entice Watch producers in the past, but this latest move has Facebook actually footing the production costs. Unlike the Facebook-owned “originals,” the influencers and publishers behind the shows would still own the rights, though Facebook would license a roughly three-month period of exclusive distribution. Facebook is reportedly willing to pay around $200,000 for an eight-episode series. (Full Story)

The Washington Post – The Federal Trade Commission and Facebook are in the process of negotiating a multi-billion dollar fine, which would settle the agency’s investigation into Facebook’s privacy practices. As the fine is currently expected, it would be record setting. Things like “mishandling user data” and “failing to crack down on other digital ills” are cited as reasons for the fine. (Full Story)

TechCrunch – Instagram recently identified a bug causing a change in account follower numbers for some users, despite those users not actually gaining or losing followers. The social network noticed the bug after users started voicing concerns of lost followers (and even unfollowed account) and worked to correct the issue. (Full Story)

The Verge – Instagram Direct, which has been an IG feature only available in the mobile app, is now being tested on the web. For users in the test, Direct will appear as an additional button on both desktop and mobile browsers and will allow for messages to be sent and received without having the app. While Instagram could simply be expanding the functionalities of Direct (they already have a standalone app) to allow more users to use the service to chat, this could also be the early stages of Facebook integrating Direct, WhatsApp and Messenger. (Full Story)

The Verge – Twitter is testing a new feature that would allow users to clarify a tweet they had previously made. Users have long asked for an edit function for their tweets, but Twitter has not implemented such an option due to the controversy and misrepresentation it could cause. The clarification function acts as a permanently pinned reply that will stay with a tweet and accompany it anytime it is retweeted. (Full Story)

The Verge – Prototypes of a new in-app Twitter camera have been spotted in the app’s code with the name “News Camera.” The feature, which is still in development, appears to offer users the option to take and modify images within the Twitter app before posting to their timeline. Similar to Snapchat and Instagram Stories, users will be able to add text, stickers and overlays to the images, offering additional context before sharing. The feature has been confirmed by Twitter, but a release date is not yet known. (Full Story) 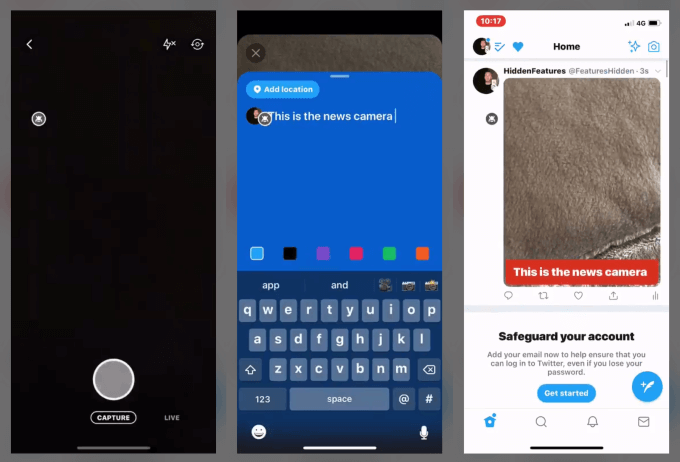