Forbes/CNET – TikTok saw monster growth in Q4 of 2019, becoming the second most downloaded app in the United States and globally. The top spot went to WhatsApp on the global list. When it comes to the most popular apps in the U.S., Disney+ amassed more than twice as many downloads as TikTok and also reached 71% of Netflix’s mobile revenue in the few months since its launch. While this marks exciting growth for Disney+, it should be noted that the data used only includes mobile revenue, and as such, Netflix may have a much larger lead with revenue from other sources included. (Forbes) (CNET)

Mashable – Nearly two years after the Cambridge Analytica scandal hit the press, Facebook is still dealing with the resulting issues. Most recently, a Massachusetts judge ordered Facebook to hand over data regarding scores of third-party apps suspended from the platform following the incident. Up until now, Facebook has not shared many names of third-party apps that were suspended or why they were suspended, which has kept some unknown privacy concerns hidden from public view. Facebook has 90 days to comply with the order, but when they do, there could be a new wave of privacy concerns unveiled. (Full Story)

CNBC – Facebook has stood its ground on controversial political ad policies over the past few months, policies that don’t limit false content being spread by ads that fall within the political realm. While fact-checking of these ads will continue to be omitted, Facebook is making platform tweaks that will affect how users experience political ads. The changes include an upcoming option that will allow users to choose “to see fewer political and social issue ads” on their services, and limit political and commercial advertisers’ ability to target them with custom lists. Facebook will also give users the ability to include themselves in a political advertiser’s audience, even if the advertiser excludes them from that list. (Full Story)

Social Media Today – Facebook has added a new “Page Management History” tab to page settings, adding a new layer of insight to changes that have taken place on the administration side of business profiles. While this addition may not have a huge business impact, it does allow more clarity as to how or why a change was made. The new feature will be able to highlight changes to page roles and page settings, business manager claims or revocations, and similar details. The new tab is rolling out to all pages shortly. (Full Story)

TechCrunch – Instagram has started testing Direct Messages on the web for a small percentage of global users. Instagram’s Direct feature has historically only been available via the mobile app, though the company did announce plans to start this test about a year prior to its launch. When fully rolled out, Instagram says website users will be able to see when they’ve received new messages, view their inbox, start new message threads or group chats and share posts from their feeds via Direct. Notably, Facebook is currently working on combining and encrypting Instagram Direct, Facebook Messenger and WhatsApp, though for now this web version of Instagram Direct does not pass the encryption test. (Full Story)

TechCrunch – Instagram has updated its Boomerang feature to give users a greater variety of options for creating with the looping video tool. Three new ways to use Boomerang have been added, including SlowMo, which reduces a clip to half speed, Echo, which adds a motion blur effect, and Duo, which rapidly rewinds the clip. Users will now also be able to trim their Boomerangs, changing the length and start and/or end frame. This first major update to the feature in five years likely comes as a response to the creative effects available on competitor platform TikTok. (Full Story)

Glossy – Shopping on Instagram is expected to be huge in 2020 – especially for direct to consumer (DTC) brands – following improvements and additions the platform made in 2019. Brands like Revolve, Good American and Warby Parker have been selling on Instagram for months now, but the platform also wants to give smaller brands more recognition (and more sales) by leveraging its own @shop account. By promoting these smaller brands (which do not pay a fee to be featured), Instagram hopes they will become users of some of the paid Instagram Shopping features, such as checkout, which the platform takes a commission from. @shop has amassed 200,000 followers since its launch last May and features new brands in a fashion similar to that of a news outlet. (Full Story)

The Verge – Twitter will be adding an option to limit replies to tweets directly on the compose screen. Twitter has been “focusing on conversations” with many of the updates made over the past year, and that continues to be true with this latest announcement. The update will add a “conversation participants” setting when a tweet is being composed with four different options: Global, Group, Panel, and Statement. Global lets anybody reply, Group is for people you follow and mention, Panel includes people you specifically mention in the tweet, and Statement simply allows you to post a tweet and receive no replies. Twitter will be testing this change in the first quarter of this year, with plans to launch it globally later on. (Full Story) 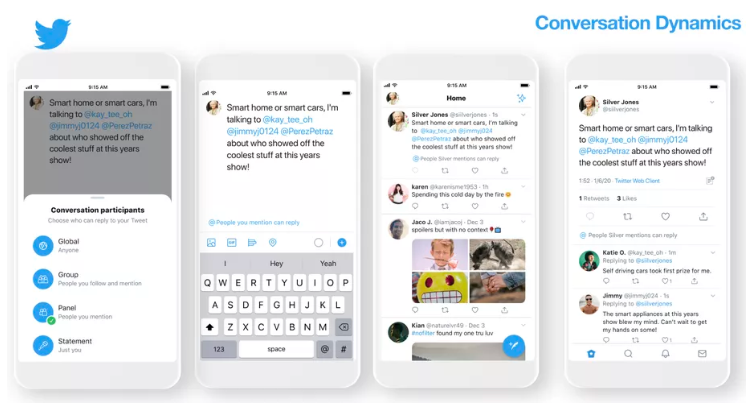 TechCrunch – Snapchat has acquired the company behind its new Cameos feature, AI Factory, for $166 million. Snap had previously been an investor in the company, as a former Snap employee (by way of a previous acquisition) was one of its founders. Cameos let a user take a selfie and then have it automatically inserted into a short video. Lenses are incredibly important to the Snapchat community with 70% of daily active users playing with them, so having AI Factory as a Snap asset is likely to grow even more exciting ways to put this tech to use, giving Snap new options to expand its AI-based filter dominance. (Full Story)

The Verge – Facebook is “backing away” from earlier plans to incorporate ad placements inside the WhatsApp messaging service. According to new reports, the team that had been working on building ads into WhatsApp was disbanded in recent months, with the work that had transpired being deleted from the service’s code. While this is a step in the opposite direction of initial plans, and while WhatsApp will remain ad free for now, Facebook still plans to eventually integrate ads into WhatsApp’s Statuses feature, which is similar to Instagram Stories. (Full Story)

Inc. – The U.S. Department of Defense (DOD) has warned people, with a specific emphasis on DOD and military-issued devices, to refrain from installing TikTok over security concerns. While the app is growing rapidly, having already amassed over 1.5 billion downloads, it has come under scrutiny due to the fact that it was created by developers in China. The DOD memo on the matter expresses concerns over “the app's popularity with Western users, including armed forces personnel and its ability to convey location, image and biometric data to its Chinese parent company, which is legally unable to refuse to share data to the Chinese government.” (Full Story)