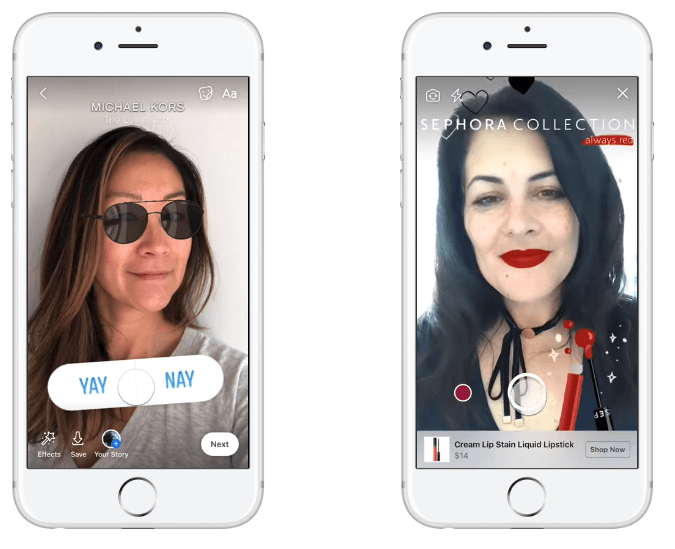 CNET – Facebook’s latest advertising feature allows users to virtually “try on” clothes and makeup by way of augmented reality (AR). The ads will appear in the newsfeed just like any other Facebook ad, but will be accompanied by a “tap to try on” option in the photo. If selected, Facebook will access the user’s phone’s camera to display the item as an AR overlay. If someone likes what they try on, Facebook hopes to drive people to make a purchase or install an app via calls-to-action within the camera experience. Michael Kors was the first brand to test AR ads in News Feed, and Facebook plans to begin testing AR ads with additional advertisers such as Sephora and others in fashion accessories, cosmetics, furniture, gaming and entertainment. The plan is to then roll out AR ads more broadly to other industries over the course of the next year. (Full Story) (See Also)

Mashable – Instagram is beginning to test a new verification process via a publicly accessible in-app form. Currently the test has only been deployed in Australia and a few other unspecified countries. By making the verification process simpler, Instagram hopes to cut down on scams where middlemen charge for verification. The goal is also to “work toward safeguarding our community.” While this is still a test, it seems like there would be little reason for the company not to roll out the new process. And while verification is becoming simpler, verified accounts are still reserved for "the authentic presence of a notable public figure, celebrity, global brand or entity it represents." (Full Story)

TechCrunch – Twitter is introducing a new ad format which will allow advertisers to “take over” the Explore tab. The platform’s new test, first piloted by Disney for the launch of Christopher Robin, displays a visual banner above trending topics in a more eye-catching way than traditional timeline ads. The new ad product aims to drive better/additional results for advertisers and increased revenue for Twitter. (Full Story)

TechCrunch – Snapchat is reportedly testing a new visual search feature called “Eagle.” This looks as though it will build on Snap’s existing integrations where users press and hold (to Shazam, for example), but is expected to incorporate the ability for users to scan products or barcodes and then view Amazon results.(Full Story)