TechCrunch – Facebook is adding reactions – Like, Love, Haha, Wow, Sad and Angry – to Stories. Stories on Facebook have about 150 million users, which is a significant number for some networks, but relatively small compared to Facebook’s 2.19 billion overall users. By adding reactions to Stories, the hope is that users will see their friends interacting with the posts and post more often. Facebook is also adding new interactive stickers which, when tapped by friends, will shimmer and notify the poster. With a few final updates rolling out, Stories are receiving the ability to start group replies from a Story and they are testing a “selfie mode” which is similar to Instagram’s focus mode. (Full Story)

Wired – Facebook is launching a new feature called “View Ads,” which as the name suggests, will allow users to view all active ads on the platform. Facebook states that the goal is to make the platform, and advertisers, more accountable and afford them more ability to take action against items that should not be present. As of now, it seems that the majority of ads will only be subjected to being viewed, while political and issue ads will show greater details about targeting and spend as was announced in April. (Full Story) 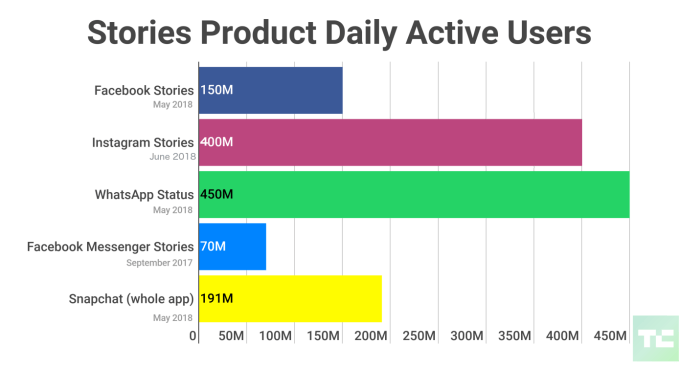 TechCrunch – Thanks to parent company Facebook’s recent deals with record labels, Instagram users will now be able to add thousands of popular songs to their Stories. Like most other Insta Story additions, music will be added as a sticker but will play automatically on the Story. Tapping the sticker is similar to tapping an @mention as it gives the user the option to tap through to an artist’s Instagram profile. This launch comes at the same time as Instagram Stories crosses the 400 million daily users mark, up from 300 million in November. This means that the Story component of Instagram is growing about six times faster than the entirety of Snapchat. (Full Story)

Forbes – Instagram has rolled out a few new updates and features, namely video chat, new camera effects and topic channels. Video chat can be launched by pressing the video camera icon in the corner of a private or group direct message. The chat can also be minimized to allow people to continue other activities on Instagram. Topic channels have been deployed in the explore tab, giving the more than 200 million users who visit it each day a way to narrow down the feed and see posts relating to a specific theme. (Full Story)

TechCrunch – Facebook is not alone in rolling out more ad transparency, as Twitter has also introduced what it is calling its Ads Transparency Center, which will give users more visibility into the ads that are running on the platform. Users can search for any Twitter handle and see all ads that have run in the prior seven days. As with Facebook, political ads will also come with additional details such as ad spend and demographic targeting. This new Ads Transparency Center will be visible to everyone, even without a Twitter login. (Full Story)

Fortune – Starting this fall, Snap will reportedly allow third-party developers to create games to be played inside Snapchat. This move would add an element similar to that of WeChat, which also has in-app games and makes a good deal of money through in-game purchases. Another benefit for Snapchat is that the addition of games could keep people on the app longer – good news as user engagement is not on the rise.(Full Story)