Fast Company – Facebook Watch is continuing to grow, and while the numbers are impressive, they do not yet reach YouTube levels, nor do they come close to reaching all of Facebook’s 1.56 billion daily active users. The latest report finds that Watch now has 720 million monthly users, up from 400 million in 2018. In addition to increasing the overall number of viewers, creators are now also being better rewarded, which could drive more of them to the platform. More videos are including ad breaks in their content, and creators are seeing a better reward as a result. (Full Story) 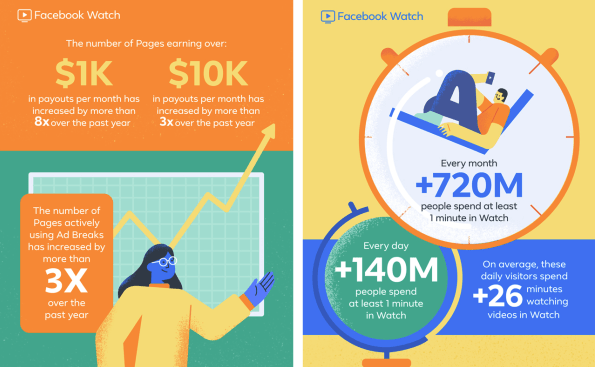 TechCrunch – Facebook, which has been working with blood donation centers around the globe since 2017, is now expanding the feature set and bringing it to the U.S. The Blood Donations section of Facebook will allow leading blood donation organizations to reach out to potential donors in times of need. The nationwide rollout will start in select urban markets including Chicago, New York City, the San Francisco Bay Area, Baltimore and Washington, D.C. To access the Blood Donations feature, users can sign up from the “About” section of their Facebook profile, which is where users will grant Facebook permission to notify them when blood banks need their help. (Full Story)

The Verge – Visa, Mastercard, PayPal, Uber, Stripe and Booking.com are all reportedly investing around $10 million a piece to help fund development of Facebook’s planned cryptocurrency. The digital coin, which is presently referred to as Libra, will become part of the Libra organization, a group which will govern the currency independently of Facebook. Libra will be unveiled on June 18. With a full rollout planned for 2020. Unlike Bitcoin and many other cryptocurrencies, Libra will be tied to a basket of government-issued currencies to help keep the value stable. (Full Story)

The Verge – Snapchat is reportedly working on an events feature, allowing users to create an event in the app and then send invites to friends. Swiping up on one of these invites would bring users to a group chat specific to the event. An integration with Snap Maps is also expected, as users will of course be able to add a specific location to an invite. Snap has not confirmed the feature, so a final release could be far off, assuming the feature is brought to market. (Full Story)

Social Media Today – Snapchat is testing a handful of new features, including new stickers and a new “Multi-Snap” tool. While Snap has offered the ability to record for more than 10 seconds for some time now, the Multi-Snap tool will work a little differently. Similar to how Instagram lets users posts multiple Story slides at the same time, the Multi-Snap tool lets users add stickers, text and other enhancements to more than one Snap prior to setting the series live. (Full Story)

Social Media Today – LinkedIn has officially rolled out multiple new features (though some have been available to most users for several months), including photo tagging, video messaging, topic listings and a slightly modified layout. Photo tagging is straight forward and allows a user to tag other users when they upload an image. Video is not complete video chat, but rather the ability to now send (and record) videos directly through the messaging portion of the app. Additionally, LinkedIn is moving the messaging and posting buttons to make them easier to find, and is providing a list of all the topics and hashtags a user follows in the side menu. (Full Story)