The Verge – Facebook, which launched Facebook Watch about one year ago, is expanding the dedicated tab/app section to international markets. The major expansion of Facebook Watch is another way the social network aims to compete with YouTube and Netflix, with a hope that more partners (both creators and advertisers) will jump on board. While those competing services currently have a much larger share of the video market, this change could still give partners more of a reason to try out Watch. (Full Story)

The Verge – Instagram is making it easier for more – but not all – accounts to become verified. Accounts that have a large following will now be able to navigate to their settings menu and request verification via a form that requires a few pieces of identifying information. With this update, Instagram is also adding some more security, including the optional use of apps like Google Authenticator and DUO Mobile, to secure user accounts. Instagram accounts with large audiences will also be getting an “About this Account” section, which will be similar to the “Info and Ads” section on Facebook pages. It will show when an account was created, the country of the account, any name changes in the past year and any ads currently running. (Full Story)

CNET – Twitter is testing a couple of new Facebook-esque features. The first of these additions is an online status indicator that will display when a user is online. Facebook and Instagram both include similar status indicators; Twitter is calling this “presence.” The second item is the addition of threaded replies, which is also already existent on Facebook and Instagram. When a user replies to a tweet that was itself a reply, the new tweet will be indented to show separation. Both of these are just tests at present, based on the idea of making Twitter more conversational. (Full Story)

Engadget – Twitter has continued taking measures to secure its network and clean up its community. The latest announcement came as Twitter suspended or removed about 700 accounts that were engaging in misinformation and sharing “divisive commentary.” Twitter has long been criticized for not handling bots and bad actors appropriately, but as of late, they have made strides to do better with this latest crackdown. (Full Story)

Forbes – Another social media usage study has come out, this one administered by eMarketer. Though Snapchat has had some not-so-great usage stats as of late, it still holds the crown with one demographic: teens. The study found that Facebook is still the number one social media channel among every other demographic, but teens favor Snapchat. (Full Story) 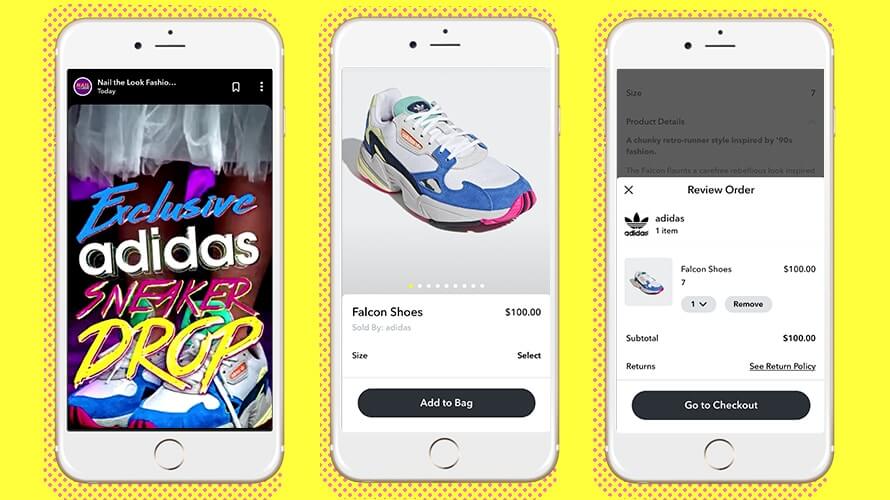 AdWeek – Every now and again, Snapchat touts their e-commerce abilities and usually has great success in selling merchandise – whether it be clothing, makeup or game tickets. Their latest e-commerce partnership was with Adidas, but rather than using AR as has been done for past activations, the commerce item was mixed with content. A special edition shoe was featured in the Snapchat show Fashion 5 Ways, and users could swipe up to purchase the shoe from directly within Snapchat. Adidas sold out of shoes within six hours. (Full Story)