Business Insider – Facebook is conducting a small test in which select group administrators can charge a monthly fee for access to the group. Of the test groups, the highest price is $29.99 a month, but other examples charge less (between $10 and $15). As it stands now, Facebook will not take a cut of the subscription fee, and the subscriptions will be handled via the in-app purchasing tools on iOS and Android. (Full Story)

Fortune – Facebook is expanding its fact-checking project, taking more steps to stop the spread of fake news. The project, which is now underway in 14 countries, uses machine learning technology to eliminate fake news stories that have been duplicated and spread to its users. The machine learning technology is coupled with organizations like the Associated Press, Factcheck.org and others that work to debunk fake news. Pages that frequently spread this type of information will have their posts “demoted.” (Full Story)

TechCrunch – Following the pace of iOS and Android releases, along with its own Instagram, Facebook is reportedly developing a “time well spent” tool which will show users how much time they spend on the social network each day. This feature has not yet been released to the public, but is expected to work similarly to the already announced Instagram feature, displaying how much time users spend on the platform each day and allowing them to set reminders for when they’ve spent a predetermined amount of time on the network. (Full Story)

The Verge – Facebook research has found a new machine learning method which could retouch closed eyes in photos, meaning that if someone blinks in a group shot, Facebook would have the ability to correct the issue using the photos of you it already has. As of now, this is just research with no real-world deployment, but a strong possibility exists for Facebook implementing this across its camera and other photo tools. (Full Story) 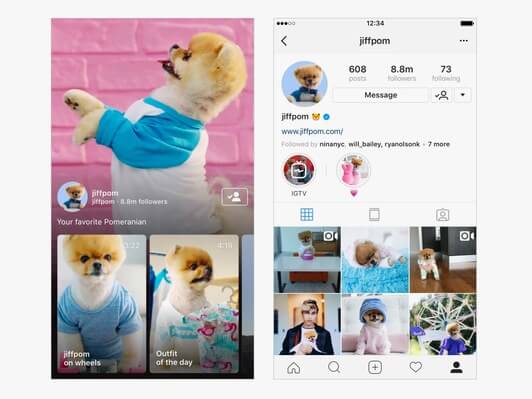 Wired – Instagram is switching up its game; rather than copying features from Snapchat, the company’s latest announcement takes aim at YouTube. IGTV is a new standalone app that will also exist as a tab in the current Instagram app. Standard Instagram video posts have a maximum time limit of 60 seconds, but videos uploaded to IGTV can be as long as an hour. The videos will be oriented vertically, and content will mostly be in the style of YouTube creators rather than big-budget productions, though more professional content could certainly make its way to the platform. While initially Instagram selected established creators to publish on IGTV, others can start publishing now and everyone will be able to publish in the coming weeks. Because of the synchronization with Instagram proper, IGTV users will see content published by people they are already following within Instagram. At launch, there is no advertising element to IGTV, but the network has announced plans to introduce ways for creators to monetize videos, likely pre-roll and mid-roll video ads. (Full Story)

TechCrunch – Twitter has acquired a tech company called Smyte, which offers tools to stop online abuse, harassment and spam. It also protects user accounts. The acquisition is positioned to help Twitter combat many of these problems that are currently present on the platform. (Full Story)

Digital Trends – Snapchat has launched Weather and World Effects inside Snap Maps, an update that brings animated weather (which corresponds to your local forecast) and other fun themes and animations to the in-app map. Mostly, the update aims to bring more details to the Snap Map feature, giving additional context to the whereabouts of you and your friends’ Bitmojis. Snap briefly showcased similar additions with an Easter egg hunt back in April and will continue fun holiday themes such as turning the map pink for Valentine’s Day going forward.(Full Story)