The Verge – Facebook has launched a new page called “Memories” which will highlight content from the past. The new section is similar to “On This Day,” which surfaces memories in the News Feed. “On This Day” is also getting some updates as it will now include a few new sections: Friends Made on This Day, seasonal or monthly recaps, and memories you may have missed from the past week. (Full Story) 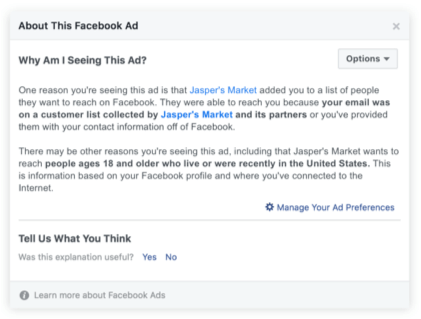 Tech Crunch – Facebook is continuing to put privacy safeguards in place, with the newest change requiring advertisers to certify consent for any custom audiences, beginning July 2. Advertisers using the audiences will need to select that data was collected directly from customers, directly from partners, or from a combination of the two when uploading new data sets. Users will be able to see if their info was collected and used for ads if they opt to block future ads from a business. (Full Story)

New York Post – Facebook has said that they will begin cracking down on e-commerce businesses that flood users’ feeds with ads for products that are unsatisfactory or don’t arrive on time. Users will be gaining the ability to leave feedback about their shopping experience from e-commerce advertisers, which is how the social network will determine problems with ads. For companies that receive a high volume of negative feedback, Facebook will warn them that they need to improve, or risk being banned from running more ads. One of the most frequent complaints Facebook sees are that people don’t like ads that quote inaccurate shipping times or that misrepresent products, so the issue is more about incorrect advertising than generally poor service. (Full Story)

Variety – Facebook really wants to make original entertainment, news, and sports video content happen on the platform. Analysts expect that the company will spend at least $1 billion – and maybe twice that – funding original content in the next 12 months. The ultimate goal is to turn Facebook Watch into a TV/YouTube-like platform, and hopefully command the advertising budgets that would be seen in traditional TV advertising. Facebook has already launched some original programming and has also ordered many new shows/series, including news programs from ABC News, CNN, Fox News and Univision which are slated to go live this summer. (Full Story)

Fortune – Instagram Stories have gained a new feature which allows brands to tag the products they feature and link directly to them. This is an expansion of this feature which already exists on standard posts; when products are tagged in a Story, users can tap the shopping bag icon and then view more details and purchase products without leaving the app. Approximately 300 million of Instagram’s 800 million daily active users use Stories, and this update will help to put shopping tags in front of users that otherwise may not be viewing standard posts. (Full Story)

The Verge – Twitter is implementing a new change that will put more live events and news stories in front of users. This starts with an addition to the top of users’ timelines where they will now be presented with alerts of live events and curated tweets – sometimes including live video – about them. The app will also start pushing more notification of live events that it thinks will be relevant to users. (Full Story)

Tech Crunch – Snapchat has officially unveiled their new developer platform called Snap Kit. The collection of APIs will allow third-party developers to add “Login with Snapchat” credentialing, build Bitmoji avatars into their keyboards, display public content from Our Stories and Snap Map, and generate branded stickers with referral links that can share back inside Snapchat. With these new tools, Snap is taking a lesson from Facebook and making privacy key; users’ social graphs will not be shared to avoid a Cambridge Analytica-type scandal. (Full Story)

Business Insider – The newest version of Snapchat’s app adds a feature called Clear Chats which will allow users to unsend (delete from all chat members) messages. The addition does come with a few caveats, as Snap says the purpose is to “clean up a typo or prevent spoilers;” it should not be relied on. Messages which can be unsent include text, stickers, audio messages, and pictures and videos sent from a user’s Memories section. Pictures, videos, and screenshot that have just been taken will not be able to be unsent. Also, whether in a one-on-one conversation or in a group, all users will see an alert stating that a message has been deleted – so the action is not kept a secret. (Full Story)

AdWeek/Marketing Land – Snapchat is working hard to compete with Facebook by bringing more commerce opportunities to the platform. Last week the premise of in-app ticker sales was in the news, but the latest commerce ad test allows users to shop a “tappable product catalog,” which will launch an advertiser’s website within Snapchat when tapped. In addition, Snap is making more ad types available via their self-serve tool. Sponsored AR Lenses are joining Snap Ads, Story Ads, and Sponsored Filters to the self-serve ad-buying tool. Within Snap’s self-serve platform, many targeting options are available including household income (which Facebook is phasing out), parental status, and available lookalikes. (AdWeek) (Marketing Land) (See Also)