Engadget – As Facebook looks to prevent future election influence, they’ve rolled out more stringent advertising rules in the EU ahead of the European Parliamentary elections. Similar to the restrictions in the U.S., anyone running political ads will need to be authorized to run them. The identity checks for EU ad buyers will be similar to what those in the U.S. have faced, and ads will also gain a “paid for buy” disclosure. In the EU, Facebook is calling the section of pages that will house ads, name changes, audiences and other info the “page transparency” section, rather than “info and ads.” (Full Story)

CNBC – The Department of Housing and Urban Development (HUD) has launched a suit against Facebook, seeking damages for any person who was harmed by Facebook’s targeted advertising policies related to fair housing. Up until a recent change, landlords could take advantage of the same targeting practices Facebook offers to other advertising customers, which opened up the potential for ads to not be shown to certain people based on race, ethnicity or gender. While these targeting options are the norm for Facebook, fair housing restrictions require targeting to be inclusive of these demographics. Facebook has already made changes to targeting options in the housing space following a previous suit by the American Civil Liberties Union (ACLU), and a spokesperson for Facebook stated it was surprised by HUD’s actions. (Full Story)

The Verge – Instagram is testing out adding a seek bar to videos posted on people’s feeds, which would allow users to move to a specific section of the video timeline rather than having to watch it in its entirety. This simple addition has been available for IGTV videos since the launch of that service, but the main Instagram feed has not seen it until now. No official rollout has been announced, though it seems likely this change will make it to market. (Full Story)

The Verge – Twitter has released a darker “dark mode,” which the company is calling “lights out.” Unlike the original dark mode, which is now the “dim” option within Twitter’s settings, lights out delivers a true black background (as opposed to dark gray), which helps to reduce eye strain and conserve battery life. On phones with OLED screens, only the pixels that aren’t black light up, which leads to the improved battery life on Twitter and other apps that offer a dark mode. (Full Story) 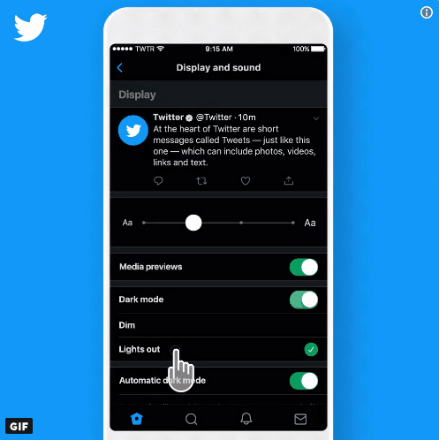 Business Insider – Twitter is working on labeling tweets from public figures that violate its rules, but are not taken down. When Twitter deems tweets like this to be newsworthy, they are not taken off the platform, which a spokesperson for the company says leaves a user to “just assume that that's the type of content or behavior that's allowed by our rules.” By labeling these kinds of tweets, Twitter aims to provide context about why some tweets that violate the rules are not taken down. (Full Story)

Mashable – A prank of sorts has gained some virality on Twitter, as it resulted in users getting locked out of their accounts. Twitter users have been encouraged by non-Twitter accounts to change their birth year to 2007 to “unlock new color schemes.” Incidentally, this change makes a user’s age 12 years old, which in turn causes their account to become locked. Twitter has emailed users who may have been fooled by this prank with the opportunity to revert the change, but Twitter has cautioned users not to fall for the scam to avoid any headaches. (Full Story)

Digiday – Over a year ago, Snapchat announced intentions to build more distribution and monetization opportunities for creators, with the overall hope of providing greater incentive for them to produce content for the platform. Now, many Snapchat creators are sharing that opportunities have only gotten worse, specifically with regard to the availability of brand deals. Creators do not access a revenue split on Snapchat as they would on YouTube, and as such many are moving off of the platform. With brands seeing less value in Snapchat, creators are also finding a need to pivot to platforms, such as TikTok and Instagram. (Full Story)