Fast Company – Facebook is continuing to fight fake news on the platform ahead of elections, with the most recent set of changes occurring in Australia. In the case of Australia, once an election is announced, Facebook will temporarily block advertisers based outside of the country from buying political ads until the election is over. This will include any ads mentioning political parties, slogans and logos. Facebook will also be launching a fact-checking service in Australia to help identify fake news being spread on the platform; an initiative already underway in the U.S. and other parts of the world. (Full Story)

The Verge – Facebook app developers have reportedly left hundreds of millions of user records exposed via visible cloud servers. Two data sets have been identified thus far, with the larger of the two coming from a Mexican media company called Cultura Colectiva, which exposed more than 540 million records. Another company, an app called “At the Pool,” exposed fewer records but more sensitive information, including 22,000 passwords. When this information was identified by Facebook researchers, the company took steps to work with Amazon cloud servers to take the data down and reminded users that developers storing data in this manner is a breach of Facebook’s policies. (Full Story)

Wired – Cisco’s Talos security division has recently revealed a security flaw on Facebook that almost seems antiquated compared to other Facebook concerns. The team of researchers have uncovered 74 different Facebook groups that centered around the sale of stolen credit card data, identity info, spam lists, hacking tools, and other cybercrime commodities. 385,000 members existed between the 74 groups and this information was essentially hiding in plain sight. Facebook has removed these pages in the past and has started the process again, but this information – which was once relegated only to the dark web – is becoming more and more common on Facebook. (Full Story)

Gizmodo – Facebook is running a series of sponsored articles in British newspaper the Daily Telegraph to promote the social network and push a positive Facebook narrative. The pieces, 26 of which have been published over the past 30 days, are aimed at defending Facebook against the notion it has been responsible for encouraging the spread of hate speech and violating privacy, along with other negative impacts. Facebook hopes that these stories, which are being run both in print and online, will help bring a bit of positivity back to the platform’s name. (Full Story)

Engadget – Twitter has been testing various ways to make the platform more conversational over the past several months, and its latest test is an evolution of a prior enhancement: the “original tweeter” label. Twitter has updated that prior test to now feature labels, including “author, mention and follow,” to add more insight into the relationships users may have with the various tweets in a thread. As with many other Twitter tests, this has not been broadly rolled out and may just be another stepping stone for Twitter’s changes. For users that wish to be more involved in the test, Twitter has also launched an experimental app called Twttr. (Full Story) 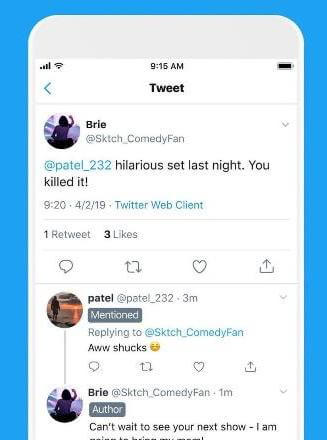 TechCrunch – Twitter is making it easier for users to appeal violations by adding the option to its app. Prior to this change, if a user’s tweet had been flagged as violating Twitters rules and/or their account had been locked or suspended, they would need to visit an online form to file an appeal. Now, they’ll have the option to provide additional context and appeal the violation right from within Twitter’s app. (Full Story)

USA Today – Snap has officially launched its own gaming platform, giving users options beyond the previously-introduced Snappables. At launch, Snap is bringing six new games to its app, four of which can be played with a user’s Bitmoji. Snap has also worked with game developments partners such as Zynga, PikPok and others, and will be rolling the games out slowly over the next few weeks. (Full Story)

TechCrunch – In addition to launching games this week, Snap is also increasing the capabilities of its camera with an augmented reality developers platform called “Scan.” The ability to scan and solve math problems or add GIFs are among the early partnerships. (Full Story)