TechCrunch – Facebook has shared some new stats that suggest Facebook Watch is growing, albeit not terribly quickly. The video hub now has 400 million users watching at least one minute per month, and 75 million users watching at least one minute per day. When Facebook shared these numbers just four months ago, only 50 million people watched one minute per month on the platform. To help support the Watch growth, Facebook has renewed four Watch original shows for a second season: Huda Boss, Five Points, Sacred Lies and Sorry For your Loss. Facebook has also been paying certain news publishers to create content for Watch, but will shift to more ad support for these pages, meaning their Facebook paycheck may decrease. This could cause some publishers to not see the value in creating Watch content. (Full Story) 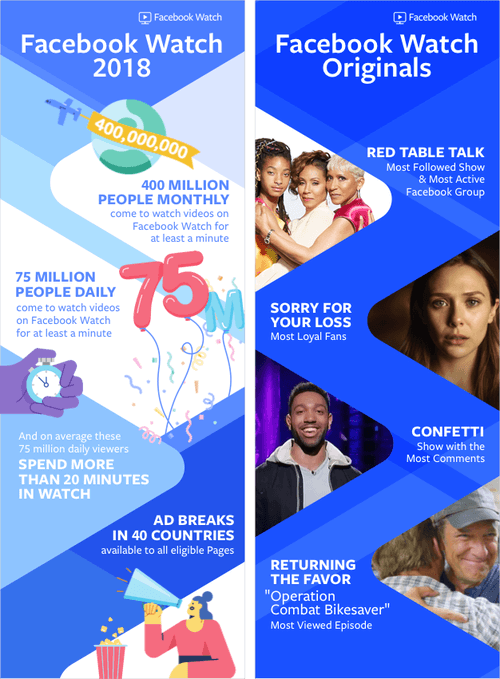 Inc. – Facebook recently filed a new patent called “Offline Trajectories,” which is expected to allow Facebook to predict the next place a user will visit. “The patent uses your previous locations -- plus previously logged locations of other Facebook users, even people who aren't your Facebook friends – to make predictions about where you're likely to go.” For advertisers, this sort of prediction capability could allow for new/improved targeting options. As this tech has sparked some backlash from users, Facebook made the following statement almost immediately after this news broke: “We often seek patents for technology we never implement, and patent applications -- such as this one -- should not be taken as an indication of future plans." (Full Story)

USA Today – Instagram is testing new “creator account” features aimed at giving brands and significant influencers tools to better track activity and growth on those accounts, while also adding new ways to connect with followers and business partners. Instagram recognizes that creators are an important part of their community and these tools, which are expected to launch next year, aim to make it an even better place to build communities. (Full Story)

The Verge – Instagram has added a voice messages feature to direct messaging on the platform. This addition allows users to send each other audio messages up to one minute long in private and group chats. Other Facebook properties, including Messenger and WhatsApp, along with Apple’s iMessages, have previously incorporated voice messaging, so Instagram is joining a popular crowd. (Full Story)

Mobile Marketer – Snapchat and Adidas have partnered for a new lens that lets users virtually try on the shoe brand’s new Ultraboost 19 ahead of its release date. Snapchat has showed off various augmented reality (AR) skills and used its unique abilities to drive sales in the past, however this is the first time the app has allowed users to try on a sneaker using an AR lens. To add another level of exclusivity to the lens, it was AirDropped to users at select locations in New York, Los Angeles and Houston. (Full Story)

AdWeek – Snapchat’s latest update for advertisers introduces “new visitor re-engagement audiences,” which allows advertisers to retarget previous visitors to their stores and create lookalike audiences based on those visitors. With user privacy in mind, the user data is anonymized to advertisers, however the targeting capabilities allow reach to be directed toward both users who have visited a location along with lookalike users. (Full Story)