TechCrunch – Facebook is still feeling the effects of Cambridge Analytica nearly a year and a half after news of the data misuse broke. The latest fine for Facebook surrounding the issue comes from Italy’s data protection regulators in the form of a €1 million fine for violations of local privacy law. While the now-existent GDPR regulations could have potentially yielded a larger fine, they were not yet enacted at the time the data misuse took place. (Full Story)

Mashable – Facebook has made significant progress in the construction of its “Supreme Court,” a sort of independent body tasked with reviewing controversial content decisions made on the platform. The board will be a 40-person group that exists outside of Facebook’s traditional policy and content moderation team, and will weigh in on only the most high-profile cases. The team will be made up of people with diverse backgrounds, experience and knowledge who make decisions around disputed content issues, helping to shape Facebook’s policies. (Full Story)

The Verge – Facebook’s newest terms of service, which will take effect beginning July 31, aim to give users a clearer picture of how their data is being used. Content removals, ad targeting, and users’ intellectual property rights are all presented in more detail, though the way in which those items take place is not changing. Much of the new language follows conversations Facebook has had with European regulators. On the advertising front, the new terms include “We don’t sell your personal data, we allow advertisers to tell us things like their business goal and the kind of audience they want to see their ads (for example, people between the age of 18-35 who like cycling). We then show their ad to people who might be interested.” (Full Story)

The Verge – Instagram is adding a new place for ads: the Explore feed. Up until now, ads on Instagram appeared in users’ main feeds and in Stories, but generally not elsewhere in the app. As ads begin to occupy Explore, they will not be shown in the main grid, but will rather be shown when a user starts scrolling after selecting a post. Instagram has already started rolling this change out with an ad for IGTV. Select partners will gain access in the coming weeks, and it should be rolled out system-wide in the next few months. (Full Story)

The Verge – Twitter is officially rolling out a new feature that will attach a notice to tweets from public figures that break its guidelines and may also lessen the reach of such tweets. This notice only applies to political figures, verified users and accounts with more than 100,000 followers. While users who match this criteria could still have tweets removed, a team at twitter will decide if the post is a “matter of public interest,” and if so, it will get to remain with this warning. (Full Story) 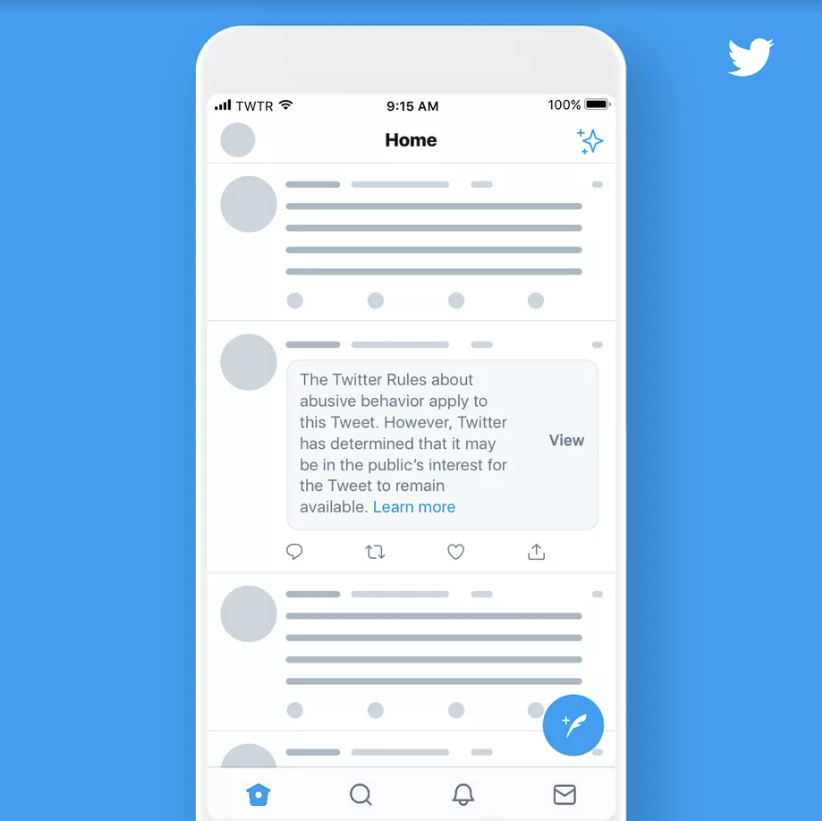 The Verge – WhatsApp is currently testing the idea of letting its users share posts from their WhatsApp status with other apps. For users in the company’s beta program, a new sharing option will now be present beneath Statuses. In addition to being able to share to a Facebook or Instagram Story, apps like Gmail and Google Photos will also be included. Although Facebook owns WhatsApp, this process does not link user accounts. Rather it takes advantage of existing data-sharing APIs, meaning the transfer of data occurs on-device before it is uploaded. (Full Story)