Is Advertising Oversaturation a Bad Thing?

Like all major sporting events, some brands go all in on opportunities like “March Madness,” choosing to capture an audience that, according to the Washington Post, increased by eight percent over last year. Games from the weekend drew an average Nielsen rating of 6.4 – an increase from last year’s 5.9.

This year, usual advertising suspects like Capital One and its consistently winning Charles Barkley and Samuel L. Jackson spots, as well as the lesser received basketball iterations of AT&T’s “Just an OK Network” campaign, made up large portions of each commercial break.

But this weekend, that large audience was also exposed to Coca-Cola’s newest product, Orange Vanilla Coke. Then they saw another ad for the drink. Then another. And then one more.

Coca-Cola introduced its latest sugary concoction earlier this year, but during the first two rounds of this year’s NCAA Tournament, the company’s seemingly endless promotional budget had some viewers taking notice for the wrong reasons.

That type of oversaturation begs the question: Is it possible for too much product exposure to become detrimental to a brand? And if so, is that risk worth it?

This isn’t the first time Coca-Cola pushed a new product in its brown sugary arsenal with a heavy hand. Notable launches like Coke Zero Sugar, as well as Diet Coke’s slew of “Because I Can” spots that featured new flavor flavor combinations, were part of big pushes for the company.

But this year, it seemed like Coca-Cola’s vintage car chase spot was always on your screen, even if it felt like you’d just watched the commercial a few minutes before.

Fans took the conversation to social media, where opinions galore were given in favor of the drink, against its over promotion, and just about every take in between. 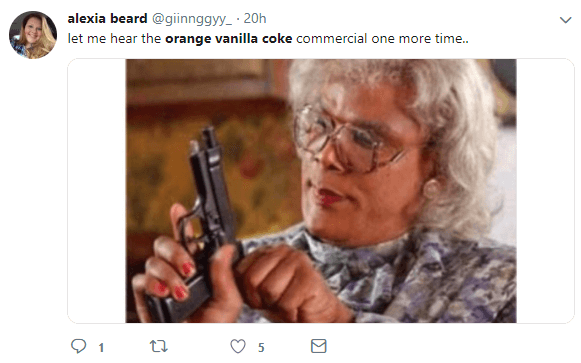 The conversation online largely surrounded the commercial’s never-ending play on Turner’s four networks that featured NCAA basketball (CBS, TBS, TNT and truTV), with little mention of possibly the more important point: Is it any good?

It’s important to remember that producing a popular commercial – which had much more of an impact before social media changed the way we consume content – can be a game changer for a brand. It’s why Budweiser’s “Whassup?” became part of pop culture references for years, and why iterations of Dos Equis’ “Most Interesting” campaign or Old Spice’s run of putting shirtless men on your TV, both continue to move the needle.

But can advertisement overplay achieve the same goal?

It’s clear that Coca-Cola became part of the national conversation, as evidenced by its spike in Google Trends popularity over the weekend.

It will certainly be interesting to see if that surge in online clout translates to sales for Coca-Cola. Perhaps if your found yourself thirsty and reaching for a Coke this weekend, you already have your answer.