What Does It Mean That Teens Are Cooling on Facebook?

The only constant of social media is that it is always changing – an aphorism that is repeated almost daily in marketing agencies around the world. While it may be trite, it most certainly has some truth behind it.

Facebook led the pack as the most used social media platform for years, at first popular mostly with teens, only reaching an older demographic more recently. However, according to a recent study by Pew Research Center and reported on by Bloomberg’s Sarah Frier, Facebook is no longer the front-runner.

Platforms like YouTube, Snapchat and Facebook-owned Instagram have gained more popularity since the last study was conducted three years ago, with Facebook only attracting 51 percent of users between 13 and 17 (nearly a 30 percent decrease from 2015). Only 10 percent of teens say it’s their most-used platform. YouTube was reported as the most popular, with 85 percent of teens studied reporting use of the platform. 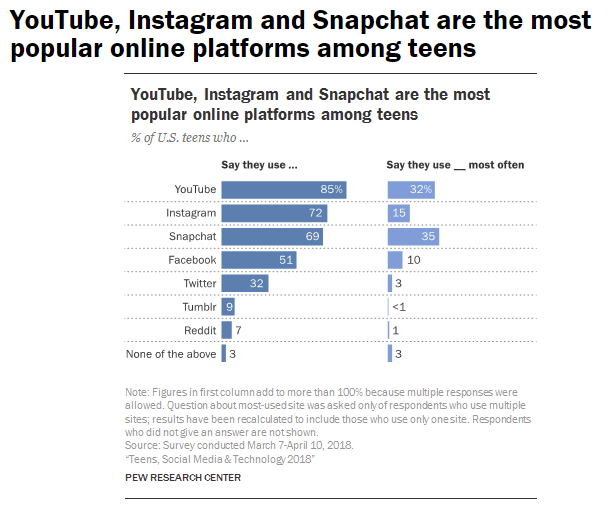 So, what’s driving this change? The study suggests that the social media environment is revolving less around a single platform than it did three years ago, especially with teens admitting that they are online “on a near-constant basis.”

Trendy YouTube stars and Instagram influencers certainly pull followers to their respective sites, and with 95 percent of teens owning or having access to a smartphone, it’s easy for them to jump back and forth between social media apps on a continuous loop.

These changes aren’t news in the traditional sense – social media marketers have known for some time that Facebook just isn’t as popular with the younger demographic as it once was. What is noteworthy, however, is how drastic that drop-off has been in the last three years.

There will always be fluctuations in user rates, as each platform updates the way its users communicate – from Facebook’s data sharing scandal, to Snapchat’s unpopular and almost immediately reversed decision to redesign its platform – but what’s most important is acknowledging that most users aren’t tied down to one social platform anymore.

As an agency, this means staying on top of all social media outlets is crucial, and with new research, it may even mean switching the focus from the once-popular Facebook site to platforms that are gaining more users. If your agency isn’t keeping up with the latest trends and industry news, that’s a problem.

And if they’re recommending Facebook as the best way to reach high school-aged customers, you may know why.